Today, the Swiss national parliament has adopted the new gambling law; the first law in Switzerland to introduce Internet blocking. ISOC-CH is dedicated to continue the fight for the Open Internet. In Switzerland every law passed can be challenged by collecting 50K signatures of Swiss citizens to enforce a popular vote (referendum). This term for the referendum starts on October 10th and the signatures need to be collected and validated within 100 days.

ISOC-CH decided to support the referendum by collecting signatures in a close co-operation with Digitale Gesellschaft and the Pirate Party. This is a similar setup as during the referendum signature collections against the surveillance laws and has worked very well in the past.

Our argumentation will focus on network blocking in the context of basic (human) rights in the Internet, which is in line with the mission of ISOC. 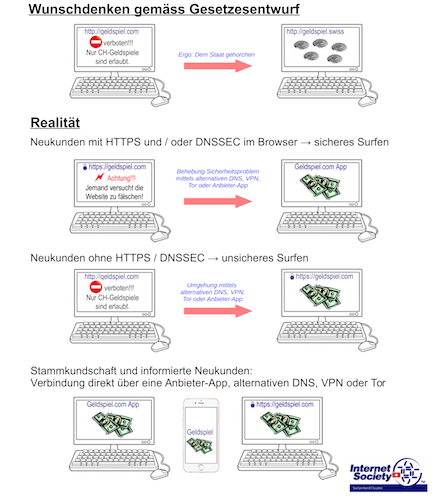 This joint effort by Digitale Gesellschaft, Pirate Party and ISOC-CH will be largely independent from the main referendum committee (led by the Young Liberal Party et al.). and its costs will be covered by own means.

If you want to support us, please visit our donations page and/or apply for membership.